Lovers reunite, and are torn apart. Bloodthirsty fiends battle for control of an army of the undead. With the community of Talbot frozen under layers of ice and snow, the domination of the vampire coven seems certain, but in the eye of the storm, the witches and the vampire hunters search desperately for the means to bring an end to the violence that threatens to take over more than one small, sleepy town. Will Rayvin and Charlotte be able to work together, combining their skills in magick, to prevent the loss of more innocent lives? 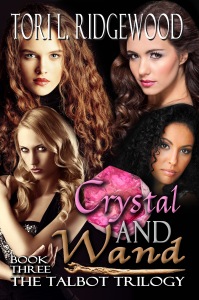 The light stretched across the splintered wood floor in long narrow columns, blocky flat fingers sliding ever closer to Andrea’s corner of the attic. It was not as bright as it had been at dawn, when she’d used the sun’s early beams to free herself from her bonds. But even though it was pale, watery, and grey under the increasing cloud cover, the light filled the narrow, angular space at the top of her home, and kept her confined within a make-shift cave of cardboard boxes and blankets.

She grinned wryly against her folded legs, the burned skin on her face crackling as bits fell away. “Remember when we made forts like this, Rayvin?” Andrea whispered. Her throat was parched, and her tongue felt like old leather, but there was no one else to hear her pathetic attempt to talk.

The urge to sleep was growing stronger as the morning grew late. Leaning back against the corner, she clasped her right elbow in her left hand, trying to lock her limbs so she wouldn’t accidentally push away her wall of boxes when she relaxed. The raging pain in the stump of her lower right arm had dulled to a pulsing ache, and she’d wrapped it in a Christmas stocking pulled out of a nearby bin. She guessed the dressing wasn’t strictly necessary. It wasn’t as though she was going to bleed to death. The burning of the sun had cauterized her undead flesh and bone neatly, but like her face, small pieces of her skin continued peeling away like charred bark off a log. It was disgusting to look at, too. There would be time later to come up with a better bandage, once the sun went down.

But by then it would be too late.

Was Rayvin even still alive?

Had Jason had enough time before dawn to put his plan into motion?

She closed her eyes against the faint glow inside her shelter.

He’d tried to kill her. Jason Lucas, paraplegic for a decade before becoming a lethal supernatural predator, had tried twice to end her existence. Imagine what he might have done, had he not been crippled before. Was it the transformation that had made him this way? The virus, as he called it, or the magick—had becoming a vampire made him evil? Or had it always been his nature?

If Jason had been a decent person before, then being turned into a vampire had corrupted him.

Andrea had been good, and yet look at the crimes she had already done in the name of her own survival. Each kill stood out vividly in her memory, making her throat convulse painfully in her dry prison. She’d reveled in her power, ravishing her victims with an urgency that had surprised her in the beginning, only a few weeks before. It was so much like sex: awkward the first time, but incredibly satisfying, and each experience following was even more so, until she found herself craving the next like a heroin addict craves a hit.

But she knew what Jason was like before. He hadn’t been a decent person, not in the slightest. She thought she understood why Rayvin hadn’t told the police about Jason’s assault on her. What chance would her foster-sister have had against the town’s golden boy? The things he’d said to her were humiliating, it made sense that she wouldn’t have wanted to repeat them or to relive the experience. Better to let people believe that it had just been an accident.

So maybe becoming a vampire hadn’t corrupted Jason. Maybe it had enhanced what he already was inside. But then, why had Andrea adapted so easily to being a killer?

She wanted to tear her hair out and beat her breast. These thoughts were driving her insane, as much as her terrible thirst. Only the fear of the weak winter sun forced her to keep herself in check.

“I am not a bad person!” she ground out, squeezing her stump until it raged in pain. “I can make it right!”

She keened as her agony and fear overflowed, shaking uncontrollably.

“Why can’t I let it take me?” Her words rasped in the dusty air. Her shuddering breath sent motes of dust into a carefree dance around her, like tiny fairies mocking her pain. “I need to die, I can’t do this. I can’t fight him. He’s won. I’m a vampire, I’m evil, just like him! God, why can’t I be strong enough to die now?”

The dust motes seemed to pause for a moment, and then appeared to drift together until they formed a sphere no bigger than her thumb. An orb. Trembling, she watched as it floated close to her, swaying on air currents that Andrea couldn’t feel. She held her breath, curling into herself. The orb began to glow, gently, emitting a nonthreatening luminescence. It approached her face, rising to eye level, and then settling over her forehead.

The brush of the glowing orb against her scorched brow felt like a mother’s kiss.

Andrea’s breathing steadied. Her mouth was still hot and dry, her throat coarse, but the torturous thoughts settled into peace. Whatever had happened, she felt as though she’d been comforted in some way. I’m only trapped for a few more hours, she reasoned. I will make it. I’m strong enough to do this, for Rayvin and for Damon.

Settling back against her corner, Andrea felt her body relaxing at last. Even the gnawing pain in her belly was bearable now. Her mind was catching up with her nonhuman senses.

Buy Links: Crystal and Wand is available from Melange Books in PDF, on Kindle, Kobo, Nook, Smashwords, and in paperback!